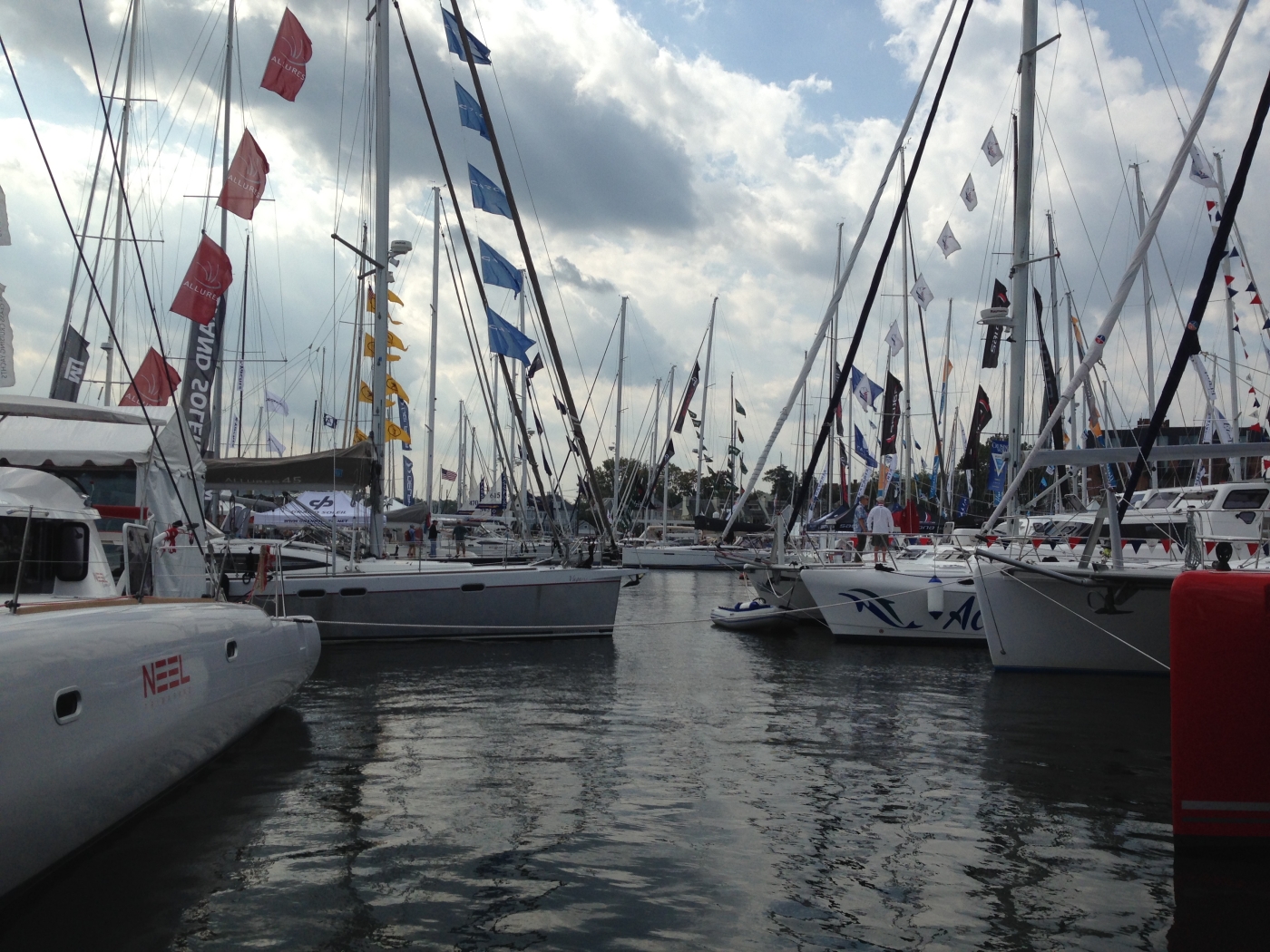 More specifically, this is some news from the VIP day on Thursday, October 8, 2015.

Catalina Yachts says they are re-introducing a three stateroom option on their upcoming 425.  Catalina has not offered a three stateroom boat since the Catalina 42, although in the interim some buyers of new Catalina yachts have converted the “flex space” beneath the port cockpit seat into a third stateroom.

Neel Trimarans brought a new 45 Custom Line, which had a new “owner’s layout”.  In this version, the starboard stateroom is converted into a very large head.  The port stateroom is larger because it does not have an ensuite head as in the original layout.

The French production builders drew much attention with their slew of new models and, as usual, excellent location at a central dock junction.

Jeanneau’s new boats are an evolution of the line being very similar to the boats each one replaces.  Jeanneau more or less added a foot to each of the existing boats, made the hull chine more distinct, and removed retractable keels as an option on the smaller boats.  However, the 519 has a centerline backstay, which is new compared to the split backstay like on Jeanneau’s other boats.

The Jeanneau 64 on display had a fiberglass cockpit arch.  Although this caused me to avoid the 64, I did learn that the arch is thankfully only an option.  While the 64’s topside port lights look garish in Jeanneau’s stock media photos, they look okay in person.

Lagoon brought their existing 620, which was available for viewing by appointment.  Appointments were not exclusive.  The boat is every bit as enormous as it appears in Lagoon’s stock media.  Lounging spaces are everywhere.  Ascending and descending the spiral companionway was not bad as anticipated.  The companionway space is tight with surrounding handholds on both sides.

Maverick Yachts introduced their new Maverick 440 catamaran, which looks like something from a James Bond movie.  The overall impression is an attractive modern look.

Fusion Catamarans had one of their kit boats on display.

Garcia brought their semi-custom 45i.  Not only is its aluminum hull impressive, but systems design is excellent, as well as fit and finish.

Southerly was notably absent.  They usually sail one of their customer’s boats from the other side of the pond.  The folks they have on board are always very knowledgeable and friendly.  Their boats are also unique in many ways, especially in that all models are blue water capable and have retractable swing keels.

I hope that Southerly was not present because they couldn’t line up a customer’s boat for the event, were concerned about the weather during the crossing, had no new models to show off, or suspected that the French production builders would dominate attention with their slew of new models out this year (more on that in a moment).  I hope that Southerly is not withdrawing from the North American market due to limited demand.

Check back later for extensive photo galleries of the Jeanneau boats.

3 thoughts on “News from the Annapolis Sailboat Show 2015”