Manual and automatic bilge pumps, whether submersible centrifugal pumps or remotely mounted diaphragm pumps, cannot completely clear a bilge of water.  Typically 1-3″ of water remains.  In a shallow bilge boat like the Catalina 25 used for this prototype system, this can lead to a substantial volume of water remaining in the bilge.  Water in the bilge can cause serious problems on many boats, including causing wood stringers to rot and internal fiberglass blistering.  Bilge water is also the primary source of that distinctive “boat smell”.

Both of these commercially available systems are intelligent, only operating their pumps when water is detected in the bilge, which results in less power consumption.  As a less intelligent and much less expensive alternative, this DIY system runs on a programmable timer, which draws power on a schedule regardless of whether or not water remains in the bilge.  Both of the commercial systems appear to not remove the last remnants of moisture from a bilge because they do not use sponges, and appear subject to clogging at their water pickup points.  This DIY system can remove the last remnants of moisture from a bilge, does not tend to clog, and costs less than $100.

This DIY system starts with common household sponges, which absorb moisture in the bilge areas.  The moisture in the sponges is sucked through small feeder tubing, leading to a simple suction manifold, with the suction generated by an inexpensive DC-electric diaphragm pump.  The discharge from this pump can be plumbed into the manual bilge pump outlet hose near where it drains to the through-hull at the transom (Plumbing to the hose near the through-hull at the transom may be considered important for safety.), or routed to the lifting cable through-hull on swing-keel boats.  The pump is controlled by an inexpensive DC-electric programmable timer, which can be installed on the electrical panel bulkhead.  For the prototype installation, the timer was programmed to engage the pump for two minutes every six hours, which resulted in a completely dry bilge in all seasons and weather, regardless of leaks and sailing conditions. In this case, the programming could be changed to pump less, such as for two minutes every twelve hours or one minute every six hours.

Regarding ongoing maintenance, the pickup sponges need periodic replacement when they begin to deteriorate, at least annually in this prototype system.  Allowing the sponges to deteriorate could cause the tubing to become clogged with sponge debris. 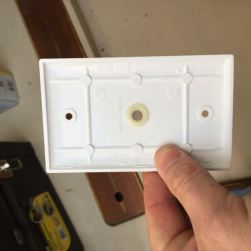 A completed pickup with sponge screwed to faceplate 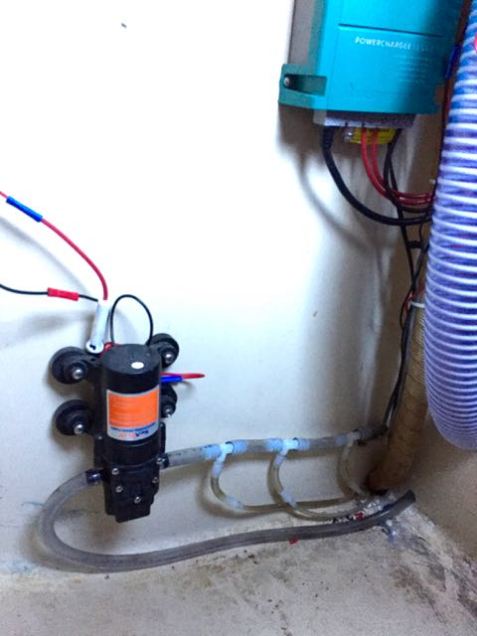 A version of this article originally appeared in the November 2017 Catalina Yachts owners’ magazine, Mainsheet.